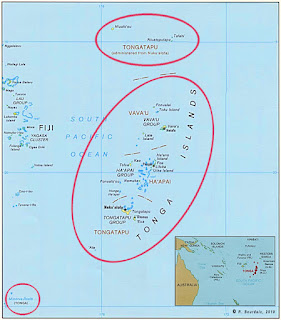 Tonga, officially the Kingdom of Tonga, is a Polynesian sovereign state and archipelago comprising 169 islands, of which 36 are inhabited. The total surface area is about 750 square kilometres scattered over 700,000 square kilometres of the southern Pacific Ocean. in 2018, The state has a population of about 100,000 people,of whom 70% reside on the main island of Tongatapu.
Tonga is surrounded by Fiji and Wallis and Futuna (France) to the northwest, Samoa to the northeast, Niue to the east (which is the nearest foreign territory), Kermadec (part of New Zealand) to the southwest, and New Caledonia (France) and Vanuatu to the farther west.

During the 1970s coconut products represented over 70 percent of the exports. The drop in the world market prices of coconut products from an average of T$$500/MT to a low of T$200/MT had a major impact on the coconut industry. The decline in the relative importance of coconut product exports was particularly severe in 1988-1989. The production of coconut products has declined from about 70 percent of the exports in the 1970s to about 41 percent in the 1985 -1988 and to a low of 1.8% in 1990 to 1993. This substantial decline has not only induced a loss in foreign exchange but also affected the employment opportunities created through copra processing, oil mill and desiccated coconut manufacturing. The decline was particularly severe on the outer island economies.


Previous development projects in Tonga
The Coconut Replanting Scheme was financed with British aid and commenced operations in 1967 with the objective of rejuvenating the coconut industry. The scheme involved direct input subsidies to encourage the replanting of coconuts. In this case, growers received a cash grant (T$4 per ha) towards clearing and establishment costs, and seedlings were distributed free of charge. The operation of the scheme was structured around the selection of seed nuts from selected mother palms and propagated in nurseries. The resulting seedlings, after further selection for vigour, were supplied to growers for replanting. Employees of the scheme did part of the land preparation and planting or else subsidies were paid to growers who did the work themselves. A further subsidy was introduced in 1975 to encourage farmers to maintain their trees.

The CIDP project funded the harvest of Tall-type coconut seednuts which were made available to farmers by the Ministry of Agriculture.

Tonga had a coconut germplasm collection that was started in 1999. Part of the collecting activity was carried out during Phase I of the Asian Development Bank (ADB)-funded project entitled ‘Collecting, conserving and characterizing coconut genetic resources in eight Asia Pacific countries’. The accessions collected came mainly from the main island of Tongatapu. Five cultivars namely Niu Kafa, Niu Vai, Niu ‘Utongau, Niu Matakula and Niu Talokave, have been collected from Vava’u, Utongau and Ha’apai (Osborne 2005). These varieties have also been planted in the genebank in Vaini Research Station for conservation and further studies. Unfortunately, the land on which the collection was installed belonged to a family of nobles who wanted to recover it, and the collection was lost.


This remote and tiny island in the Tonga group is located at about 200 km from the nearest island, and has the shape of a split coconut (Fig. 5). Niuafo'ou is a very active volcano that slopes steeply down to the sea floor. There is no safe anchorage for boats. The name of the Island, Niuafo’ou, means "New coconut". More than 150 years ago, Tahitians were aware of the existence of the special coconut variety conserved on this small island located at more than 2,800 km from Tahiti.

The oldest description of coconut varieties in French Polynesia can be found in the book "Ancient Tahiti" by Teuira Henry, published in 1928 from data collected by her grandfather in 1840. Teuira Henry reports that the Tahitians knew of the existence of particularly enormous round coconuts growing the island of Niu-Fou (now known as Niuafo'ou, Tonga Islands).

Another example of traditional conservatoire comes again from Tonga. In 2001, we visited numerous Pacific islands in the framework of surveys organized by Bioversity International. L. M. Fili and T.H. Hoponoa, from the Ministry of Agriculture and Forestry of Tonga, tell us about the highly prized, traditional coconut variety called ”Niu utongau“. This variety belongs to rare forms of coconut, highly threatened, and known as « Sweet husk »: The husk of unripe fruits, which is usually tough and astringent, is tender, edible and sweet. It can be chewed like sugarcane. Its taste resembles that of coconut heart. Once the fruits are ripe, the husk fibres are white and thin. There exist various names and various types, in which husk characteristics are more or less accentuated –more or less sweet, more or less smooth. For some varieties, ripe fruit can be husked by hand, which is impossible with an ordinary coconut. Those varieties have yet to be scientifically described. According to Tongans, the ”Niu 'utongau” coconut variety can be found in quantity only on the small coral islet (motu) of Onoiki in the Ha’apai group (Fig. 2). Tongans are still sometimes taking seedlings from that motu, which is too small to appear on most maps.

Note; the distance between Niuafoʻou and Niuatoputapu is approximatively 204 km.