Public lectures: Coconut renewal: traditional and new stories about the tree of life.

By Roland Bourdeix
A first public lecture was held on monday 26th February 2019 at the University of South Pacific, Suva Campus, Fiji. A second one is planned at the Fiji National University, on 6th September 2019. 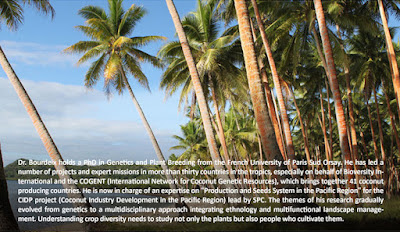 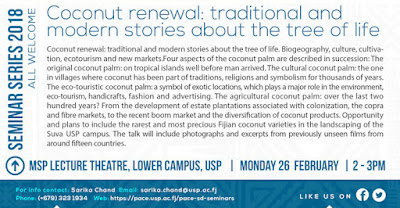 
traditional and modern stories about the tree of life.
Biogeography, culture, cultivation, ecotourism and new markets.

This lecture lasts from 60 to 75 minutes and comprises twenty-five to thirty slides. It includes photographs and excerpts from previously unseen films from around fifteen countries. Four aspects of the coconut palm are described in succession:
The original coconut palm: on tropical islands well before man arrived.
The cultural coconut palm: the one in villages where coconut has been part of traditions, religions and symbolism for thousands of years.
The eco-touristic coconut palm: a symbol of exotic locations, which plays a major role in the environment, eco-tourism, handicrafts, fashion and advertising.
The agricultural coconut palm: over the last two hundred years? From the development of estate plantations associated with colonization, the copra and fibre markets, to the recent boom market and the diversification of coconut products.
Opportunity and plans to include the rarest and most precious coconut varieties in the landscaping of campus of universities and other public places will be discussed.

The original aspects of the coconut palm covers the dissemination of its fruits by sea, the concepts of genetic drift, founding effects, natural selection and biodiversity. The theory of coconut dissemination and the mystery of the "wild" coconut palm, the first variety to be lost, are also discussed. Coconut reproduction methods, which vary depending on the varieties, are described, highlighting the research issues yet to be solved.
The cultural and ethnological aspects of the coconut palm are doubtless the most surprising features of this lecture. The spectacular diversity of its fruits, and its worldwide distribution, are presented with special emphasis on the selection criteria that lie behind that diversity. Particular attention is paid to Dwarf coconut palms, the most advanced stage of coconut domestication by man. The feminine symbolism of the coconut palm is explored, particularly through Indian and Polynesian legends, linguistic analyses of Indonesian dialects, and a comparative mythology approach. The traditional South Sea islander practice of planting on islets is described; as part of a project, such practices could be incorporated into a rational modern strategy for biodiversity management.
The touristic coconut palm abounds, be it in advertising or planted in tropical tourist resorts; but all in all, little is known about coconut and its diversity in that professional environment. As far as cultural aspects, eco-tourism and gastronomy are concerned, coconut still requires further integration. In some countries, coconut-based handicrafts are developing, but further progress also remains to be made. The answer lies in developing projects that combine eco-tourism, the renewal of local cultures, the conservation of genetic resources, and their use in landscaping, gastronomy and handicrafts.
The agricultural coconut palm is examined from the angle of the planting material used in plantations, and the background of breeding techniques used for that material: low-efficiency mass selection, progeny-based selection, the advent of coconut hybrids and their improvement. The coconut palm seems to be evolving from the status of an industrial crop to a fruit, food and environmental crop.
We would like this lecture not to be attended not only by farmers and scientists, but also landscape gardeners, mayors, those in charge of regional planning, managers of tourist complexes and travel agencies, associations for the renewal of local culture and lastly, of course, nurserymen and gardeners. The lecture ends by presentation of the book  "Coconut, a guide to traditional and improved varieties", of which the lecturer is first author.
To know more:
https://replantcoconut.blogspot.com
https://polymotu.blogspot.com 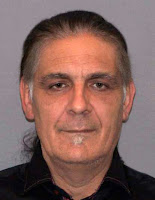 Short presentation of the lecturer:
Dr R. Bourdeix holds a PhD in Genetics and Plant Breeding from the French University of Paris Sud Orsay. From 1989, he was recruited by the French Agricultural Research Centre for International Development (CIRAD). From 1989 to 2000, he worked as coconut geneticist in the Coconut Research Station "Marc Delorme" from CNRA (National Agricultural Research Center of Cote d'Ivoire, West Africa). From the 1990s he conducted training activities at the University of Cocody. He also led a number of projects and expert missions in more than thirty countries in the tropics, especially on behalf of Bioversity International and the COGENT (the International Network for Coconut Genetic Resources) which brings together 41 producing countries. From 2011 to 2013, he coordinated COGENT and was in charge of the compilation of the Global Strategy for Conservation and Use of Coconut Genetic Resources. Network communication was also strongly enhanced through the inclusion of many photographs, posters and videos. In 2013 he created the NGO Diversiflora International whose aims to promote diversity in all its forms, whether natural (biological) or cultural.. In 2014, he joined the Research Unit AGAP (Genetic Improvement of Mediterranean and Tropical Plants) and its Scientific Team DDSE (Dynamics of diversity, societies and environments). He is now in charge of an expertise on "Production and Seeds System in the Pacific Region" for the CIDP project (Coconut Industry Development in the Pacific Region) leaded by SPC. The themes of his research gradually evolved from genetics to a multidisciplinary approach integrating ethnology and multifonctional landscape management. Understanding crop diversity needs to study not only the plants but also people who cultivate them.
To know more:
https://rbourdeix.blogspot.com