Kiribati is made up of 33 islands in 3 groups scattered over more than 5 million sq km of the Central Pacific Ocean. Total land area of the country is approximately 800 sq km. 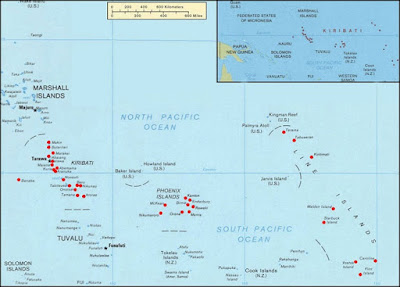 The Kiribati Group consists of 16 islands lying roughly north-south between 1400 and 2100 km north of Fiji. Tarawa is slightly to the north of the centre of the Kiribati chain of islands. The Phoenix Islands consist of 8 islands (mostly uninhabited) lying approximately 1800 km south-east of the Kiribati Group. The third group, the Line Islands, is divided into two smaller groups; the northern-most are situated about 3300 km east of the Kiribati Group and about 2000 km south of Hawaii. The southern-most are located about 900 km North-North-West of Tahiti. Except for Banaba all islands are coral atolls that do not rise more than 4m above sea level. The islands have porous, sandy, rubbly coral soils. The thinness of the soil layer causes a general paucity of vegetation although in islands of higher rainfall vegetation tends to be more lush. Coconut, breadfruit, papaya, pandanus (and on some islands banana) are the main tree crops. Cultivation of the land is difficult and requires special techniques, constant attention and water.

Here under is a short movie about planting technique made in Tarawa Atoll, Kiribati islands.

Some of the information released in this section come from Jean Pierre Labouisse, CIRAD researcher, who visited Kiribati in 2001 the framework of the CGRNAP– Phase II Project: Coconut germplasm collecting, characterisation and conservation in Cook Islands, Kiribati, Marshall Islands and Tuvalu (LOA IPGRI 00/015, March 2000-February 2001).

In 1960, the copra and coconut industry of Gilbert and Ellice Islands (Kiribati and Tuvalu) was surveyed by Alan Green from Unilever Plantations Limited. Green’s report recommended that agricultural staff be employed to assist landowners in improving their coconut groves, following agronomic advice of IRHO’s atoll research station in Rangiroa. Green’s proposal was put in practice in 1963 using a programme of rolling replacement and renewal of low yielding coconut groves with agronomic advice from Rangiroa.
Some demonstration plots were established but lack of funds and lack of permanently Outer island-based staff have limited the programme. At the same time, the first coconut trials were established on Kiritimati (Christmas) Island in 1963. These examined varieties, planting methods, spacing, germination and nutrition. But due to the remoteness of the island and the discontinuity of supervision, few of the experiments were carried to a successful conclusion.
In the late 1960’s and early 1970’s, a spacing trial and NPK trial were established on Tarawa. The spacing trial has proved to be an useful and representative trial and the NPK trial was aimed at the very particular problem of coconut nutrition on reclaimed lagoon mud. At the same time, a spacing trial was established on Butaritari but it was found to be on the site of an old airstrip.

Throughout the 1970’s, two large coconut schemes were devised to boost copra production:

a) Coconut Improvement Scheme: this scheme aimed to improve the quality of existing stands of traditional palms groves by thinning over-dense areas, gapping-up sparse areas. A moderate subsidy was paid to stimulate the work and was continued for a further 8 years if maintenance was up to standard on regular inspections. The scheme was popular and should be considered a success. After improving 1384 ha, the scheme was closed in 1974 due to lack of funding.
b) Coconut Replanting Scheme: this scheme focused on planting up new areas and replanting at optimum density areas with less than 49 palms/ha. A large cash subsidy was paid to farmers for replanting. The standard of work by the landowners and the Division of Agriculture staff in the scheme was very high but the palms continue to be unhealthy and poor yielding and the scheme did not create the radical increase in copra production that was expected.
The Replanting Scheme was halted in 1981 after replanting of 2072 ha (7,9% of the land area of the Gilberts Group). This scheme had two major defects:
Coconut demonstration project. The main objective of the project was to educate and assist farmers who wish to improve their coconuts. Activities included establishing demonstration plots on each island, organizing field days for farmers, conducting radio programmes about coconut improvement, and providing training on recommend crop management techniques. The expert asked details about this project, such as when it began and ended, number of concerned island, budget and funding, but did not had reply.

At Tarawa, the Ministry of Agriculture have a section devoted to Crop Research that deals with the coconut and other fruit crop, but there no officer focusing only on coconut. in 2018, the coconut seed system was said to have started around 2014. Its objective was to replant 2000 seedlings for each of 20 islands/provinces of only the Kiribas group islands, so a yearly total of 40000 seedlings corresponding to about 280 hectares. There was no budget dedicated specifically to the coconut palm, but only a global budget for agriculture extension services. The Ministry of Agriculture told that the agricultural or extension officers located in the islands have only a total yearly budget of 600 AUD per island/province for buying all the planting material, including coconut and other crops. In Kiribati group, the officers are buying seednuts to farmers at 0.50 AUD per piece, make them germinate and release them free to farmers. When analysing the monthly reports, the total number of seedlings released to farmers in 2017 was only 5462, so 12.5 % of the initial objective.
In Abaiang island, an officer (John Kaboua) recently organised a Soccer coupe with young farmers. In order to be registered to this Soccer coupe, farmers have to plant before a number of coconut palms (the expert asked how many coconut palms, but did not had reply). Anyway in Abaiang, the seed production system seems not to be so efficient, as according to monthly report, only 17 seedlings where released to a unique farmer in 2017.
The two other islands groups Phoenix and Linnix are not concerned by this program. Another Agriculture headquarter acts in Chrismas Island for Phoenix and Linnix and may have its own coconut program, but no detail was provided from Tarawa.

The activities funded by the CIDP project in 2019 are summarized in the following table.

Here are some rapid descriptions and pictures of a few interesting coconut varieties available in Kiribati. This topic needs to be studied more systematically and more thoroughly. Most of these varieties would need to be introduced into ex situ collections, to be characterized and described in a more scientific way. Theu would also need to be purified by eliminating off-types, and to be integrated into a comprehensive breeding program.

In Nonouti, the islanders are said to be familiar with four « varieties » of coconut palm:

Germplasm introductions and observations (from Kent Trewen, 1985)
In 2000, the site of the future national genebank was discussed with Mrs Tearimawa and Mr Manate Tenang and Jean Pierre Labouisse, CIRAD. Christmas Island (Kiritimati) in the Line Group had been proposed at first because large land is available in this outer island. Nevertheless due to excessive distance between this island and Kiribati Group (3300 km as the crow flies) and to the complicated and costly airway (transit by Fiji or Marshall Is. then Hawaii), the supervision of works, data collecting and use (as a seed garden for example) of this genebank may be difficult to carry out. 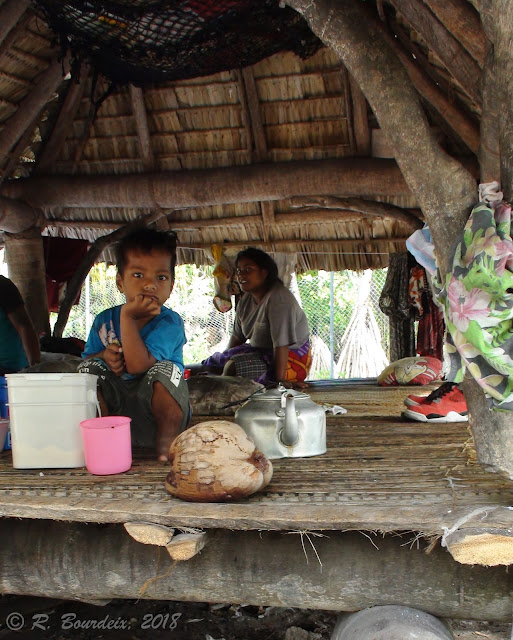 Katharine Luomala in her well-documented book gives a list of local names for the plants of Gilbert group and their description by the European travellers. Amongst them, the coconut (te ni) in Kiribati is described by Dumont d’Urville, Wilkes (« the cultivation of the Gilbertese consists for the most part in that of coconut and pandanus, which are their chief article of food », « on Butaritari, the Southeast side is a continuous grove of coconut and pandanus, with some undergrowth.»), Coulter («on Butaritari, the land is thickly covered with coconuts and Pandanus.»), Agassiz (« as to Butaritari, nowhere have we seen finer groves of coconut trees; they attain colossal size, grow thickly in an unbroken mass, and both here and at Marakei, are perhaps the finest coconut groves of the tropical Pacific.»). As a result of its prominent role in the local culture, the islanders give a name to each stage in the development of the nut and also a specific use. Bingham states that there is 12 stages in the development of the nut, Grimble 17 stages and Luomala in Tabiteuea 8 stages.

The book, « The Materiel Culture of Kiribati » by Gerd Koch, illustrated with 130 accurate drawings and 38 photos, is an extraordinary sum of knowledge about the uses of the coconut in 3 islands of Kiribati (Nonouti, Tabiteuea and Onotoa). Apart from being a source of food for human and pigs, the various parts are also used for the following purposes: