How farmers can produce by themselves Hybrid, Tall and Dwarf varieties in the same field!


The third recommendation endorsed during the 2012 COGENT Steering Committee Meeting was to encourage local stakeholders (men and women farmers, private enterprise, NGOs and CBOs) to become more involved in supplying quality planting material, and to teach farmers and other stakeholders how to autonomously produce quality seedlings of hybrids and other varieties, using the Polymotu concept or any other adopted method (Bourdeix and Allou, 2012a).

Although some recent initiatives have been launched, the link between the production of planting materials and the in situ conservation of coconut varieties needs to be further emphasized and promoted. In the case of the coconut palm, policies for seednut production can be classified in four categories:
Our belief is that the options 2 and 3, in which farmers, researchers and other stakeholders are more closely interacting, are the most efficient in terms of conservation and use of genetic diversity. Farmers could be taught on how to produce in their fields both traditional varieties and modern Dwarf x Tall hybrids. Most of Traditional Tall varieties are generally of mixed colours, including green, green brown and brown palms. We assume that, in such a population, a green palm crossed with another green palm always gives a green progeny. Figures hereunder illustrates a possible method to turn part of a farmer’s field into such a seed garden by using both colour genetic markers and the specificities of the landscape providing buffer zones as pollen barriers.

The following steps are proposed:

1) At the beginning, the field is planted with Brown, Green-Brown and Green palms from a traditional Tall variety. 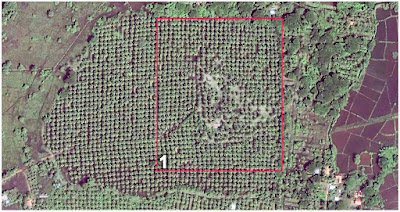 2) Cut all brown and green-brown colored palms and keep only the green-colored ones. 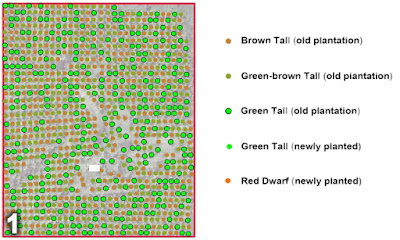 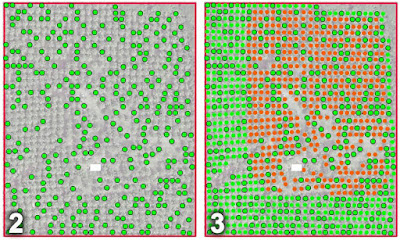 4) Two years later, when the first dwarfs will be close to flowering, and according to the result of this characterization, remove at least half of the green-colored Talls and keep only the best.
5) Plant again Red Dwarfs and/or selected Green Talls on the available space. 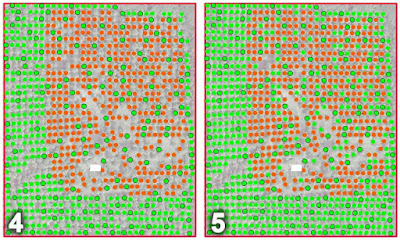 Steps 1 and 2 can be conducted either successively or either in a more progressive way: for economic reasons, it could be envisioned to plant first the Dwarfs under the existing Talls, and to remove the brown and green-brown Talls only one or two year later, when the Dwarf will be close to flowering.
This design was presented by using as parent the Malayan Red Dwarf which is a strongly autogamous variety. For producing hybrids seednuts, this dwarf variety needs to be emasculated. Other Red Dwarf varieties could also be used instead of the Malayan. Some varieties especially interesting are the Allogamous Compact Red Dwarf recently discovered in French Polynesia and Fiji. By using such allogamous Dwarf, it could be expected to produce up to 50% hybrid seednuts without making any emasculation; such an economy of labour and manpower could allow to strongly reduce the cost of hybrid coconut seednuts.